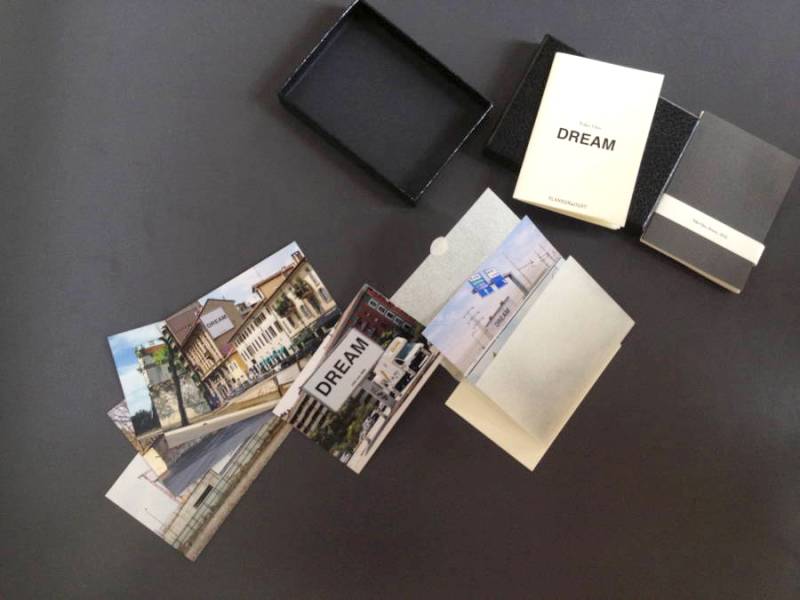 On the occasion of the birth of Foundation Bonotto at Palazzo Badoer, Venice, with a series of events that Monday - June 10, 2013 - saw as protagonist the artist Yoko Ono, with a lecture open to the public and the installation "I'llbe back", Flaneur & Dust presented the first project of the publishing house.

It is DREAM by Yoko Ono, a tribute to the performance installational DREAM edited by Fuoribiennale and Archives Bonotto. The installation realized in 2009, year in which Yoko Ono was awarded the "Golden Lion for Lifetime Achievement" at the 53rd International Art Biennale of Venice, in collaboration with R'evolution Life and the technical partners Clear Channel and IGP Decaux, has seen papered since May 25 throughout the all summer, with hundreds of posters and billboards that carried the message word-DREAM by Yoko Ono, facades, walls, bridges, but also bus stops of many Italian cities, including Bari , Bologna, Catania, Florence, Genoa, Milan, Naples, Padua, Rome, Turin, Venice, Verona.

The publishing house Flaneur & Dust (www.flaneur.it) has gathered in 500 numbered copies (color and black and white, some of which are signed) the most significant photographs of the large installation project, personally selected by the artist and a contribution designed specifically and solely for publication.

Accompany the photographs some small essays by the curators, Luigi Bonotto and Cristiano Seganfreddo|Fuoribiennale.

This first edition developed in collaboration with Foundation Bonotto marks the beginning of a joint publishing project that aims to describe the world Fluxus and Experimental Poetry through the works of Archive Bonotto, of its protagonists and the special point of view of the publisher through ten new editions.