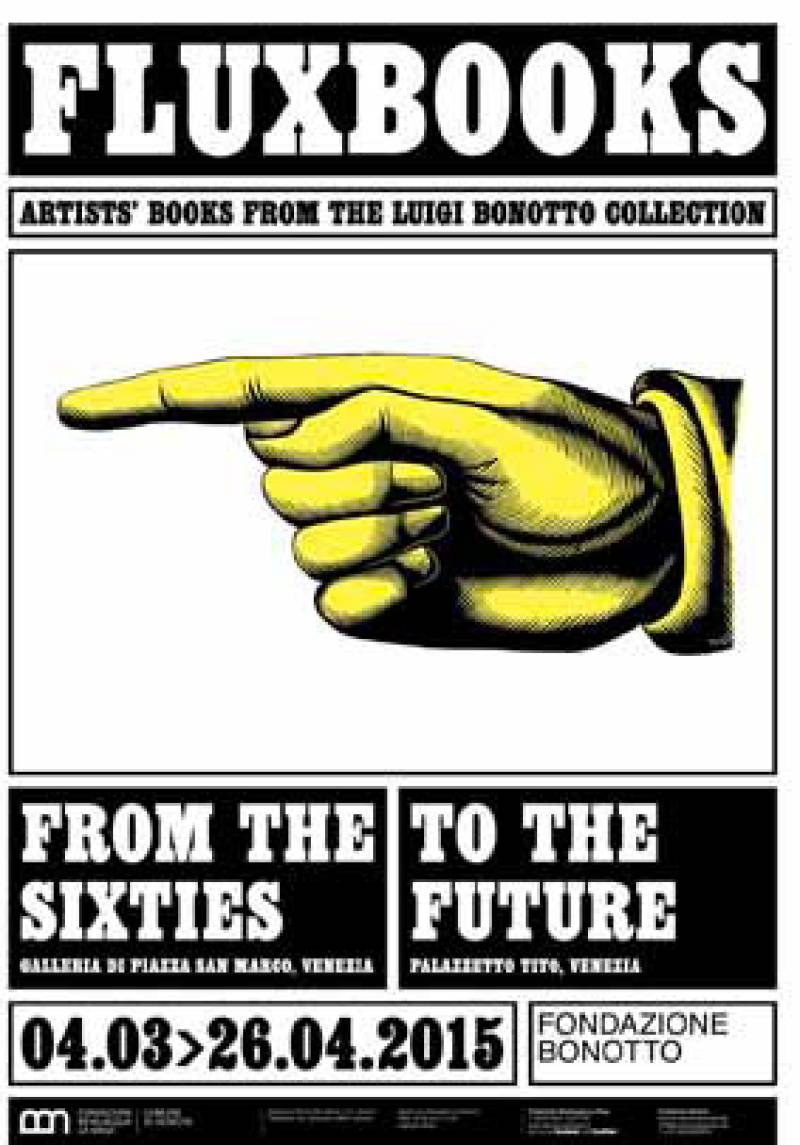 Fluxbooks. From the Sixties to the Future

FluxBooks is an exhibition project dedicated to artist's books that is the result of the collaboration between the Bonotto and the Bevilacqua La Masa Foundations. Its intention is to re-launch one of the most radical and utopian poetics - developed in the last century - towards the future.

Divided into two exhibitions, which present artist's books produced by Fluxus and the works of Bevilacqua La Masa's young artists respectively - starting with the study of these materials, FluxBooks will run from 4 March to 26 April, 2015 at the Venetian locations of Palazzetto Tito and the Galleria di Piazza San Marco.

The numerous aesthetic experiences which alternated one another during the twentieth century found a happy medium for experimentation in the artist's book. Increasingly easy to produce, thanks also to the spread of relatively cheap and simple-to-use methods of printing, it led to it being chosen, in some areas of poetry as a veritable tòpos, even in the most advanced forms of its negation.
Fluxus is undoubtedly one of the most prolific and irreverent moments of transformation of the book medium. In fact, the experiments by the artists associated with the group organised by George Maciunas, have profoundly marked the way the book object is conceived.The most obvious evolution, in its drastic negation of the book object itself, is without doubt the choosing of the most disparate of objects as books. Items which present themselves as enigmatic and completely unreadable if not as a metaphor that is closely linked to the poetics developed by the author of the book itself. These are the so-called "book object", a definition that highlights the even more difficult assimilation of such a pointed position compared to an object that has always been the depository of human culture and recollection. The most daring evolution, even if today it is still perhaps the least analysed, is to be seen in graphic composition, which carries on the intentions of the historical avant-garde movements of the early twentieth century, and continues to influence contemporary production.

The FluxBooks exhibition project is divided into two sections:

FluxBooks: From the Sixties...
Set up within the spaces of the Galleria di Piazza San Marco, the exhibition include artists' books produced within Fluxus that span a period of time that goes from its establishment, through the early 1960s and right up to the death of its founder, George Maciunas, in the late 1970s.
As well as the books there also be a variety of documents (posters, invitations, photos, videos, etc.) that will be of use in reconstructing the cultural climate of the time. The exhibition is divided into five thematic areas. Book as book - the book remains the book in its objectivity, but it is subject to a radical transformation of its content and the graphics chosen; Book as memento - the book as the only remaining document that bears witness to a performance, a happening, an action; Book as object - the book loses its classical form and its readability and transforms itself into an object; Book as plot - the book intended as a scenario, an outline, a tool to be used for a game, a performance or an action; Book as box - the book as a container of surprises that becomes a veritable box in the Fluxkit series.

FluxBooks... to the Future
Organised within the spaces of Palazetto Tito, the exhibition presents the works of young artists of the Bevilacqua La Masa Atelier, produced during study stays with the Fondazione Bonotto. A hitherto unseen reflection on some historical Fluxus artists' books, chosen by them as the object of dialogue, re-launching one the most radical and utopian poetics - developed in the last century - into the future.

The connection between the two exhibitions is evident not only through the organisation, which include video or web connections, but above all in a two-volume publication that restore unity to the entire project.