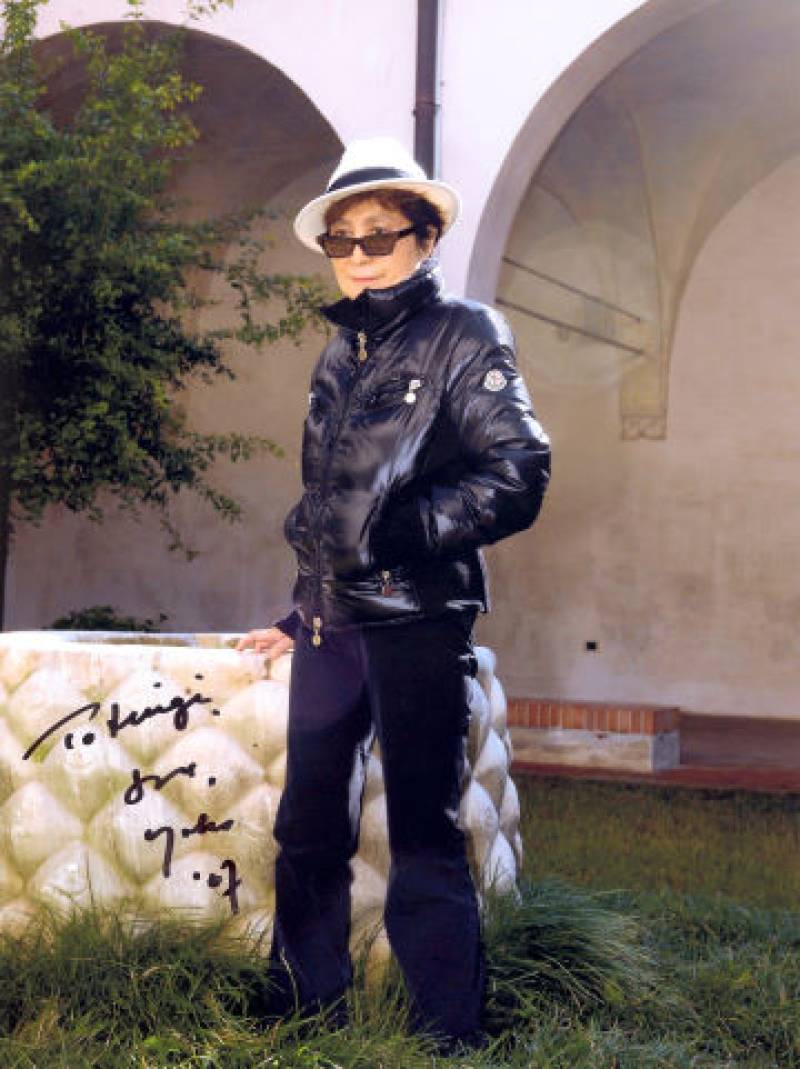 The Cultural Association Lazzari, the Treviso town hall and the Archivio Bonotto in Bassano del Grappa are promoting the exhibition Dream, an exposition dedicated to the works of the artist Yoko Ono. The event, hosted by the Santa Caterina Museum in Treviso, will have as object historical works but also new original works by the artist, in site-specific collocations. The artist will as a matter of fact insert her installations in such a way to encourage a dialogue with the museum’s context and stimulate the intrinsic relation between the historical value of the building, the works herein exhibited and the expressive-conceptual power of her contemporary creations.
The exhibition (from 29th September to 7th January) will be articulated internal to the museum’s cloisters and in specific halls dedicated to temporary events.

Concept
The desire to establish a relation between art and life, the power of temporariness in order to overcome la static nature of the artwork: these are just some of the cues for meditating on the creative research by Yoko Ono.
The American artist is considered one of the most significant contemporary authors; from the sixties up to today she has worked in various cultural circles, from music to poetry, from the visual arts to performances. Every event is always animated by a strong intellectual and conceptual mind.
The exposition in Treviso develops in a way to touch various aspects of Yoko Ono’s production. From the historical performance Blue Room Event (that will be proposed during the inauguration) to the projection of different videos like Happy X-Mas, War is Over and Onochord, the exhibition is a metaphorical journey through Ono’s poetic vision.
Of particular interest are the installations Sky Watch Ladders and Wish Tree, emblematic of the direct relationship between the work of art and the viewer. In addition, an imposing marble sculpture will be exhibited at Santa Caterina entitled Play It By Trust. An evocative work that will be positioned at the entrance of the Museum, becoming the symbol of the exhibition.

Influences
Yoko Ono in the sixties becomes part of Fluxus, a group of artists who develop a peculiar conception of the visual arts. The work of an author cannot be carried out solely through traditional means in making art and limit himself only to the creative moment; this is the key concept of Fluxus.
La exposition is supervised by Jon Hendricks of the Yoko Ono Exhibitions in New York, coordinated by the Lazzari Cultural Association and promoted by the Archivio Bonotto.
Its organizational supervision is entrusted to Dr. Emilio Lippi, Director of the Civic Museums in Treviso.
For the occasion a publication will be realized that will have as object the expository course proposed by Dream and will outline, in particular, the different designing and realization phases of Play It By Trust, investigating the value of contextualization of the work in the town’s historical centre.

Life
Yoko Ono was born in Tokyo in 1933, and at the age of twenty she moves with her family to New York. In the sixties, she is one of the prominent members of the Fluxus movement, a free association of avant-garde artists operating in the early sixties.
Yoko Ono was one of the first artists to explore conceptual art and performances. Particularly important in her works is the relation between Art and Life, founded upon the sense of everyday casualness; during her long and profitable carrier she has exhibited in some the major museums of the world. Just to mention a few, the MOMA e the Withney Museum in New York, the ICA in Boston, the Reykjavic Municipal Art Museum in Island, the Sogetsu Museum in Tokyo. Furthermore, she is taking part in major contemporary expositions, amongst which the Biennial Exhibition in Venice and Documenta in Kassel.