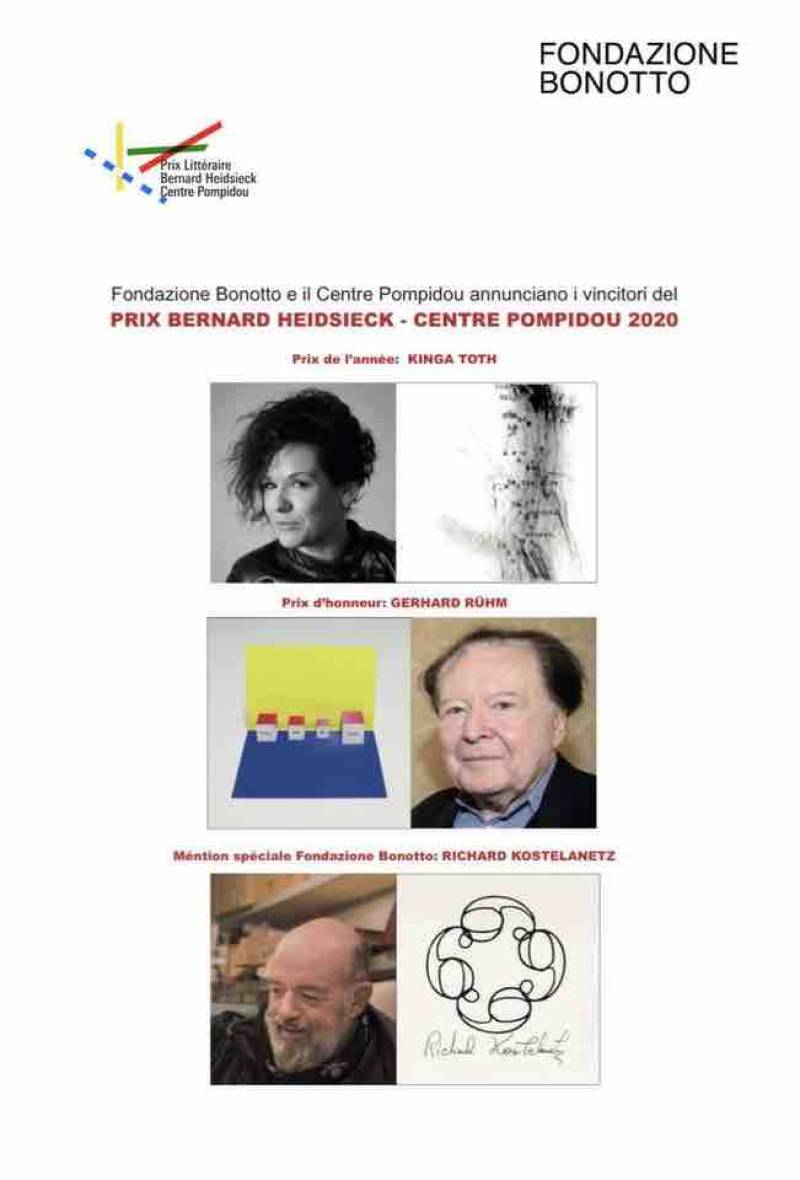 Three prizes were awarded during the day:

1) The PRIX 2020 recognizes an author for the relevance and quality of his literary creation for the year 2020 has been assigned to KINGA TOTH (1983, Sárvár, Hungary), writer, artist, poet and performer.

2) The PRIX D'HONNEUR Bernard Heidsieck-Center Pompidou, which recognizes the remarkable value of a lifetime of artistic work, was awarded to GERHARD RÜHM (1930, Vienna, Austria), an important and historical figure in experimental poetry.

By awarding him the Prix 2020, the jury of the Prix Littéraire Bernard Heidsieck - Center Pompidou intends to consecrate the quality of a work that is built at the crossroads between literature and art, and which has undergone a very strong stage evolution in the last two years. Kinga Toth's work resonates deeply with the contemporary world and its problems, especially the technological ones.

GERHARD RÜHM (1930, Vienna, Austria)
A leading figure in experimental poetry, writer, sound poet, visual artist, composer, drama-thurgist, editor, etc. Rühm was one of the founding members of the “Wiener Gruppe”, considered the first Austrian avant-garde movement, the forerunner of Viennese actionism. Rühm belongs to the classics of modern German literature, whose borders widen in the direction of the visual arts and music, introducing notions such as "visual music", "sound poetry", "gestural drawing" ... His vast and varied visual work, influenced by Expressionism and Dadaism, often incorporates materials of everyday life, cut out and restructured into complex compositions. Rühm's works are often found on the border between music, language, gesture and visual. His sound works are outstanding examples of innovative radio pieces. His work has been recognized with numerous prizes and awards: since 1978 he is a member of the Freie Akademie der Künste in Hamburg.

By awarding him the Prix d’honneur, the jury of the Prix Littéraire Bernard Heidsieck - Center Pompidou intends to dedicate a historical figure, an aesthetic adventurer of experimental poetry, at the crossroads between visual arts and musical composition

RICHARD KOSTELANETZ (1940, New York, USA)
American poet, writer, avant-garde artist, critic and curator, Richard Kostelanetz was born in New York in 1940. With his literary production and visual poetry he introduced new grammatical and expressive codes that have been defined over the years. 60 as "radical and intolerant". Famous for his prose, short stories and historical contribution to visual poetry, Richard Kostelanetz uses devices such as linguistic connections, number sequences, puns, alliterations, parallelism, constructivism and minimalism that challenge the reader.

The Fondazione Bonotto's support for the Prix Littéraire Bernard Heidsieck - Center Pompidou stems from the desire to give new light and relevance to this extended field of literature, in all its declinations and artistic expressions. In fact, it represents the contemporary and diversified evolution of artistic expressions that have had their maximum development with the practices of experimental poetry collected by Luigi Bonotto.