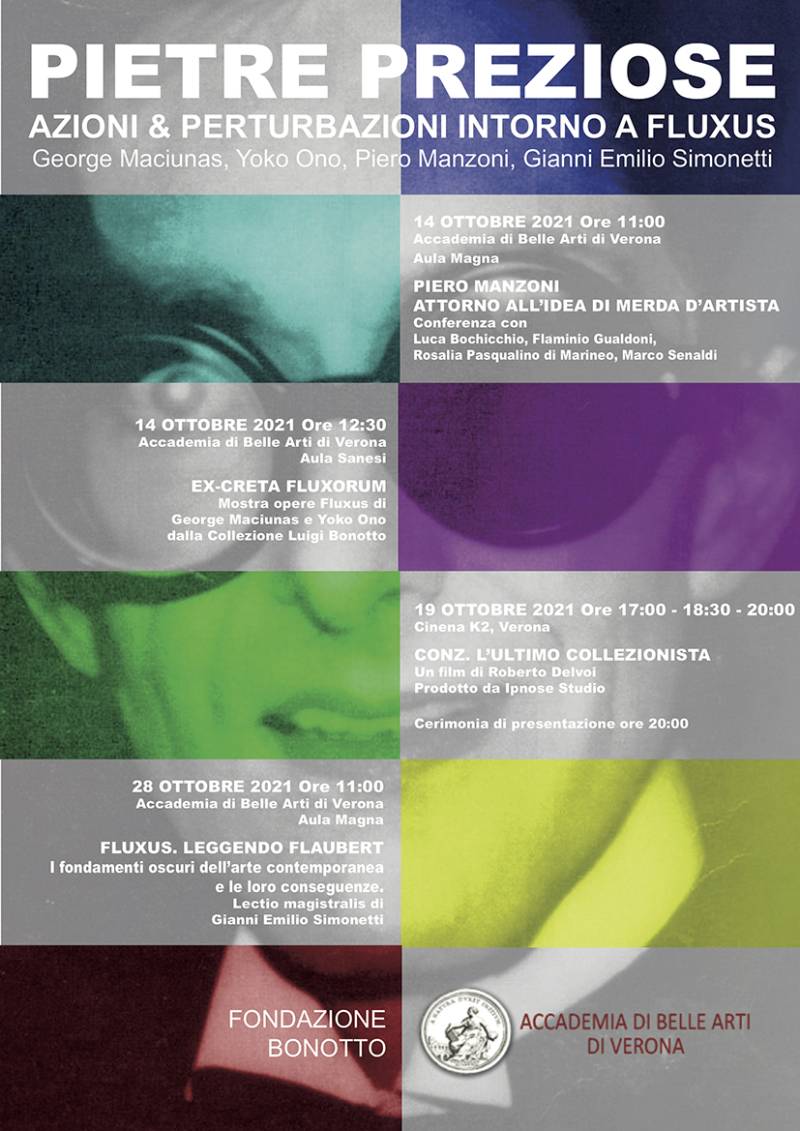 After the exhibition of Anselm Kiefer's work Für Paul Celan in 2019, the annual event dedicated by the Academy of Fine Arts of Verona to contemporary art continues.
The 2021 edition focuses on Fluxus, one of the best-known artistic movements of the 1960s. In addition to still representing the conceptual basis of a large part of the feeling of world artistic research, it is a current whose intense international ramifications are intertwined for more than one reason with the city of Verona itself.
The selection of the works, carried out thanks to the partnership of the Fondazione Bonotto, includes the video Four (Fluxfilm no. 16) by Yoko Ono and the work Ex-creta Fluxorum by George Maciunas (founder of the movement) accompanied by the screening of the film / documentary by Roberto Delvoi: Conz. The Last Collector, dedicated to Francesco Conz, a well-known Veronese collector known as one of the most important documenters of the movement. The film won the FILAF D'OR 2021 at the Festival International du Livre d’Art et du Film in Perpignan.
The event will also host a conference by: Luca Bochicchio, Flaminio Gualdoni, Rosalia Pasqualino di Marineo, Marco Senaldi, and a lecture by Gianni Emilio Simonetti that will help focus on Fluxus poetics and philosophy in its contemporary ties and developments.

FREE ENTRY with Green Pass
upon registration at the following link
www.eventbrite.it/e/biglietti-piero-manzoni-attorno-allidea-di-merda-dartista-169773704721?fbclid=IwAR0-dMC9eEk91nWGSGksgNwiPupDdDBRUTpzNW39k4Xo7OHE8g5eckDanuM

FREE ENTRY with Green Pass
upon registration at the following link
www.eventbrite.it/e/biglietti-ex-creta-fluxorum-169755195359?fbclid=IwAR2zagN3U_WMmQWEjtFgESk2gkzrvT9fy2dilmD0JvIVMhbA6x58BSo4RE4

"CONZ. THE LAST COLLECTOR"
A film by Roberto Delvoi Produced by IPNOSE STUDIO

FREE ENTRY with Green Pass
upon registration at the following link
www.eventbrite.it/e/biglietti-conz-lultimo-collezionista-169806946147?fbclid=IwAR1zA7Q6evF0-XDzUtCjSmtPzi3oYFdFJKElPwsoIlvAu9cURGqINTfrvQ0

FREE ENTRY with Green Pass
upon registration at the following link
www.eventbrite.it/e/biglietti-fluxus-leggendo-flaubert-169808115645?fbclid=IwAR0xnvefTY0nDmLR6t6qHxPfMiOKEU5LBR1oKPfQ9FbxvbjmNmkoHf9ZLK8