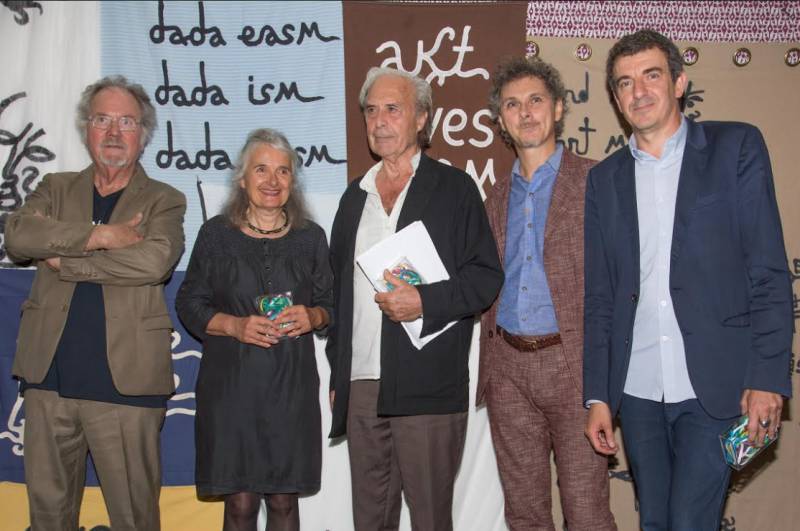 Fondazione Bonotto has the pleasure to announce the second edition of Prix Littéraire Bernard Heidsieck-Centre Pompidou an the opening of Lamberto Pignotti's solo show during Extra!, non-book literatures' Festival.

Prix Littéraire Bernard Heidsieck-Centre Pompidou, awarded to John Giorno, Caroline Bergvall and Lamberto Pignotti in 2017, has shown its originality in Literary Award's field highlighting new forms of no-book literature: sound poetry, performance, lectures, radio.. This year the President's jury is the writer, poet and performer Julien Blaine.
The prize is divided in three categories:
- Prix d’honneur awarded to an author whose artistic work in general reflects the concept of literature out of the book, this year goes to Michèle Métail;
- Prix de l’année for a specific work particularly important in the field of non-book literature, goes to Fia Backström;
- La Méntion Spéciale Fondazione Bonotto, awarded to an author selected by a dedicated jury composed by Fondazione Bonotto. Alain Arias-Misson is this year's winner: Fondazione Bonotto wants to pay tribute to the creation "Public Poems" since the 1960s, a practice that has opened new possibilities for poetry. Absolutely different from performance and happening, a new form of artistic action based on elements extracted from the street (traffic, monuments, commercial and financial institutions, popular movements...), "Public Poems" are a form of poetry that finds its ideal place in public spaces, especially in urban spaces..
This last category's winner will realize a tapestry in collaboration with the enterprise Bonotto SpA.
On the occasion of this second edition of Festival Extra!, there'll be the opening of Lamberto Pignotti's solo show. The artist won the prize in the catagory La Méntion Spéciale Fondazione Bonotto in 2017 and now he exhibits some new works and the tapestry realized.

Fondazione Bonotto's support to the Prix Littéraire Bernard Heidsieck - Center Pompidou was born from the desire to give new light and relevance to this enlarged field of literature, in all its declinations and artistic expressions. It represents in fact the contemporary and diversified evolution of the artistic expressions that had their greatest development with the practices of Experimental Poetry collected by Luigi Bonotto.

Extra !
Festival of non-book literature
from 5 to 9 September 2018