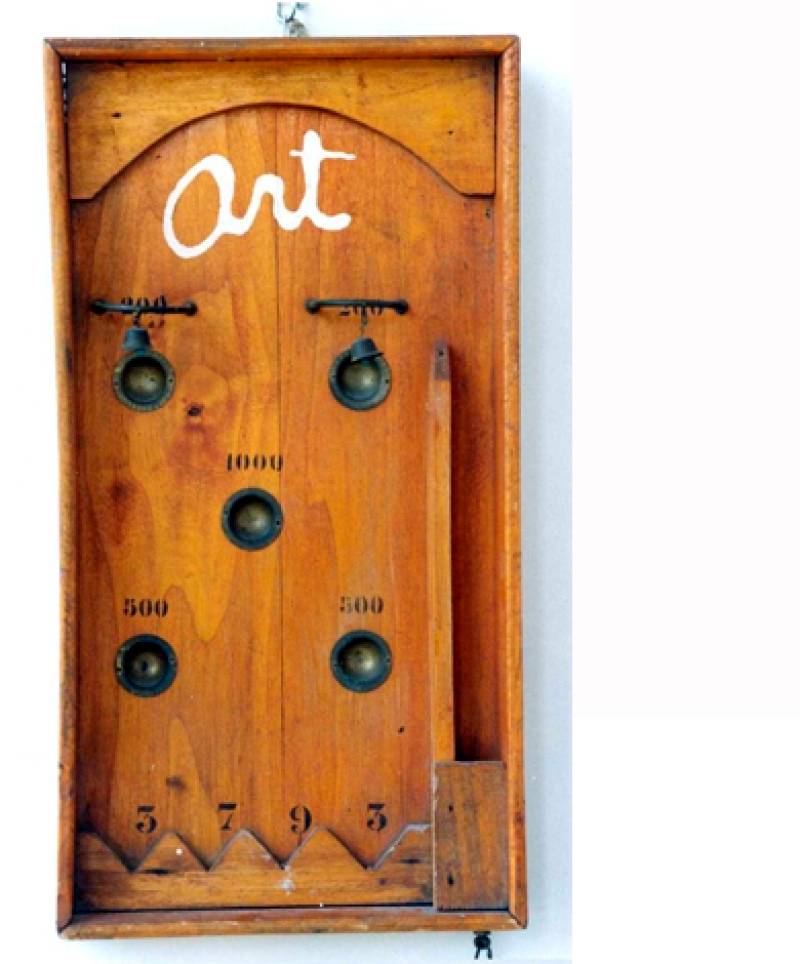 
"My towns full of dreams in the company of Yoko Ono."
The textile industrialist from Molvena continues to take forward Fluxus idea, the artistic attitude created in 60's.

It's hard to find the textile factory of Luigi Bonotto in Molvena, a little Si fa fatica a trovare l’impresa tessile di Luigi Bonotto a Molvena,a little village in the countryside around Vicenza. And when we found it, it doesn't seems to be a factory. The workshops are behind, out of sight of the visitors. What you can see is a beautiful villa in rustic patio has already, in an eye, the two passions of its owner. An old wooden frame of the early twentieth century and a horse's head in white marble signed Yoko Ono. Bonotto is a character as there are few glasses with red temples and watch the same color, curly white-haired and gentle air. It is one of the greatest patrons of the international art movement Fluxus, Fluxus admitted to be restricted and circumscribed in the word "movement".

As a child, his father, who already took care of textiles, led him to see Giotto and the old masters, as a teenager, as a logical consequence, the passion of Bonotto, who meanwhile began actively seized of the textile, moves to the Impressionist and avanguardie.Ma abstraction, which seemed to him the best chance of conceptual art, loses interest when Louis began attending the Venice Biennale, where he was able to discover the informal and become attached to Widow, Burri, Christo and Fontana, as he says, "I have literally opened up my mind." During a series of journeys met John Cage, founder of Fluxus with Maciunas and Robert Rauschenberg. We are in the early sixties. "The United States of America had a clear choice - he says -. Reigned the pop art with its myth of industrial products, while the artists of Fluxus were the "bad friends", so little classifiable with their conceptual elaborations, where more that the work had the idea and its communication. Not surprisingly, still pop art is widely known, as opposed to Fluxus who is loved only by insiders. "

Of this network of artists who did more involved? Bonotto does not hesitate: "John Cage, Joseph Beuys, Ben Vautier." But it was not only the patron Vicenza to travel to meet his heroes (Milan became a memorable game of chess with Marcel Duchamp), eranoanche the artists who came to settle most of the year in his home and in his laboratory to create . As so many were there in-house company Molvena. Here then in the middle of the meeting room there is a large round table glass Milan Knizak that contains reproductions of everyday objects such as a coffee maker or a typewriter. And the wall is an irreverent interpretation of the Good Shepherd of Daniel Spoerri. Remember Bonotto: "I ​​let the artists the right quiet to work during the day and in the evening we talked about everything until late at night. Yoko Ono was here in 2009 and, based on an idea together, we papered many Italian cities than just a panel that says Dream. "The artists of Fluxus were not interested in the gallery, but the ideas increasingly free, crossover between styles, exploration of areas that until then had not been considered artistic.

Huge Bonotto Archive: part shows itself among the furniture business, in part is packed, a bit 'of the children's home. And it's really interesting that the choice Bonotto did you want to categorize everything he putting it online in a very rich site called www.archiviobonotto.it. The site is in progress, but there are already many biographies of the artists, images of their work, their music, their videos. But it does not end here. Other artistic initiatives are underway and more will come. "Fluxus began in the sixties and ended in the late seventies, imiei are memories of an old man - said smiling to the clatter of the looms and the comings and goings of employees that lead up and down the wefts and warps colorful -. Yet we continue to pursue those ideas. We have organized an exhibition of Joseph Beuys with posters, videos, performances, books, posters. For now was made in Brazil and Mexico, but should also arrive in Europe, Austria and perhaps even in Italy. I hope so. "