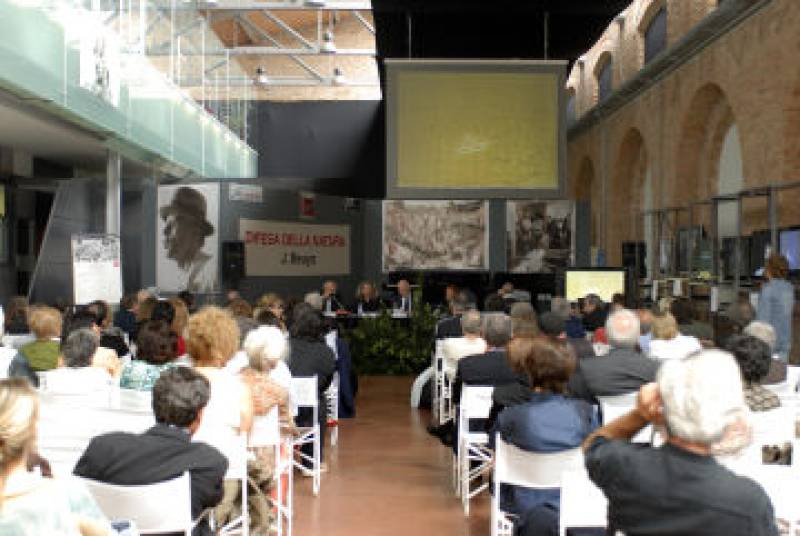 Internal the Venetian Biennial Art Exhibition in Venice, from the 10th of June for 100 days, at the Thetis Showroom, will take place the event "Joseph Beuys. Defence of Nature. The Living Sculpture. Kassel 1977-Venice 2007." Homage to Harald Szeemann. The project created and supervised by Lucrezia De Domizio Durini has reintroduced in Venice, after thirty years and with today’s developments, the cultural, environmental, social, economical, humanitarian and political argumentations analysed by Beuys for 100 days at Documenta 6 in Kassel.
100 days where during the presentation of the Free International University, economists, intellectuals, lawyers, educators, scientists, fashion designers, philosophers, artists, students, musicians, religious, environmental and humanitarian foundations, managers in economy, laboratories with the main aim of discussing the different possibilities for improvement in human life are involved in open discussions similar to the way it was back then in Kassel.
A social model, the famous "Living Sculpture," the highest artistic humanitarian achievement of the twentieth century by Joseph Beuys, one of the most emblematic and significant artist in the history of Art in the second half of the Twentieth Century. The Living Sculpture is, in Beuys’s philosophy (characterized by the protection of the environment and of man who is part of it), the mutual and free collaboration e communication amongst men of different cultures, origins, religions, social, economical and political status.
A precious publication with the selfsame title of the event, edited by Silvana Editoriale (MI), has been realized in the two distinct Italian English versions. Other than Lucrezia De Domizio Durini, intellectuals who collaborated culturally and scientifically in the Post Beuys years, will also participate in the event. Each intervention and showroom have been photographed, recorded and video filmed by experts in order to produce documentation that will one day be published, both in Italian and English, for a comparative analysis of the two historical periods 1977-2007: a "document-appeal" to the world in an attempt of social and cultural rebirth.

The Archivio Bonotto has realized for the occasion a DVD video where posters by Beuys realized and published between 1964 and 1986 (year of the German artist’s death) can be viewed.
The video, shown in repetition, allows you to follow in chronological order the thematic and graphic excursus of the over 170 images of Beuys’s Announcements.