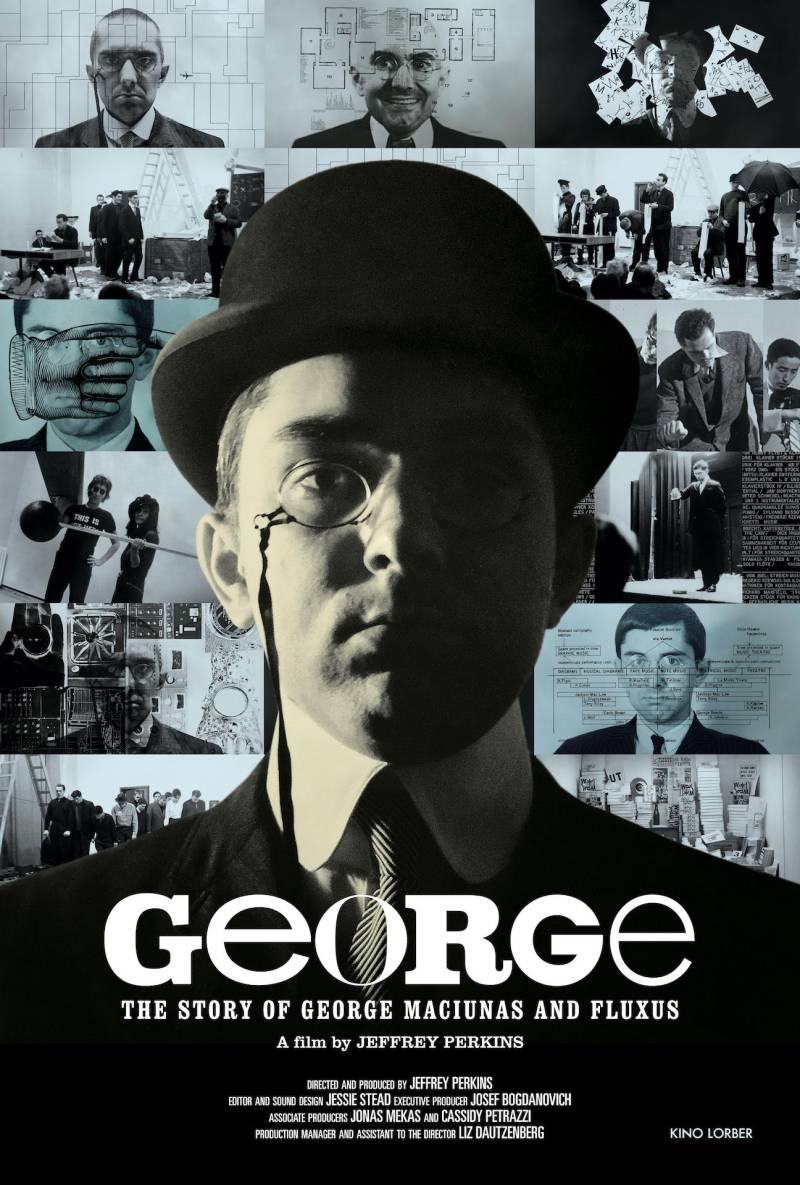 Fondazione Bonotto is proud to present for the first time in Italy the film “George. The Story of George Maciunas and Fluxus” by Jeffrey Perkins.
After the European premiere at the latest edition of Art Basel, the documentary about Fluxus and its founder George Maciunas, is presented at the Macro Asilo Auditorium, Sunday October 13, 3 pm. The docu-film will be introduced by Patrizio Peterlini (Director of the Fondazione Bonotto) and Marco Maria Gazzano (Professor of Cinema, Roma Tre University) who will dialogue with the Director and Producer Jeffrey Perkins. Full of interviews, testimonies and historical video documents, the doc retraces the life of George Maciunas, from his childhood in Lithuania, to his first steps in the artistic environment of New York, to the foundation and development of Fluxus, the international artistic network that has had a profound and lasting influence in the art world.

Synopsis: George Maciunas (1931-1978) was the founder of Fluxus, a radical avant-garde art movement of the 20th century. The film traces how the Lithuanian-born iconoclastic polymath assembled an international network of artists, musicians, and poets that provoked social and political change through performance, ready-mades, and artworks aimed at collapsing the boundary of art and life. From developing the first artist- owned lofts in SoHo, New York, to his attempt to realize a utopian society on a desolate island in the Caribbean, Maciunas was an uncompromising visionary with a rebellious sense of humor. What emerges in the film, is a kaleidoscopic, often contradictory but always revealing portrait of Maciunas' bold and tragic life. With interviews among over thirty artists and scholars including Yoko Ono, Jonas Mekas, and Nam June Paik, the film recounts Maciunas' mercurial personality, asks questions that remain central to our contemporary moment, and explores how one can live a meaningful and artful life.

Biography of the filmmaker: Nicknamed 'the Fluxus cabdriver' by Nam June Paik, Jeffrey Perkins is an artist and filmmaker who has worked in relative obscurity for over five decades, having collaborated in the 1960s with Fluxus artists including George Maciunas, Yoko Ono, and Alison Knowles. Perkins co-founded the multi media group “The Single Wing Turquoise Bird”, which was the premier rock and roll concert light show in the sixties. Until recently he was best known for his light projection performances and his “Movies for the Blind”, based on sound recordings of interviews with passengers in his cab. He completed the feature documentary portrait of “George - the story of George Maciunas and Fluxus” in 2018 and his feature “The Painter Sam Francis” in 2008. Other films of his hand are “Fluxus Film #22: Shout (1966)”, “Stan Brakhage on Gregory Markopolous (1998)” and “Meet the Kuchar Brothers (1999)”. Jeff Perkins has been associated with Anthology Film Archives in New York since 1986, and has produced several programs and performances there since then.

Review: ‘George,’ Like Its Fluxus Subject, Is Playful and Prankish by Ben Kenigsberg

It’s appropriate that “George,” a documentary about George Maciunas (1931-1978), the Lithuanian-born artist who devised the manifesto for the movement known as Fluxus, should be, like that group itself, playful, prankish and a little hard to pin down. A running joke in the film imagines an interviewer asking Mr. Maciunas what “flux” is, and never quite managing to get a definition.
Reviewing an exhibition on the occasion of the manifesto’s 50th anniversary, Holland Cotter, writing in The New York Times, described Fluxus as a “giant nebula of international collective activity” that was “anti- capitalist, anti-elitist, pro-community and pro-play.” Jonas Mekas, a friend of Mr. Maciunas’s who made his own film about him, says Mr. Maciunas was trying to bring a sense of lightness to art.
The director of “George,” Jeffrey Perkins, an artist who is described in his own biography as a Fluxus associate, emphasizes the contradictions of the enigmatic ringleader. Was Mr. Maciunas a significant artist himself or more of an organizer? Was Fluxus an original idea or did it simply seize on a post-Dada spirit that was already fueling conceptual and performance art across the globe in the 1960s? Fluxus may have been a way for the domineering Mr. Maciunas, an admirer of military history, to try to conquer and monopolize the avant-garde — though at times he had some difficulty bending artists to his will. And the Fluxus philosophy had democratic and even utopian underpinnings.
Mr. Perkins livens up what could have been a dull talking-heads presentation with vortex-like editing, often dividing the screen into multiple panels and making inventive use of sound design. There is no shortage of vintage Fluxus footage or arcana to draw on; the interviews, old and new, with Maciunas associates like Yoko Ono, Nam June Paik and Henry Flynt are informative and often fascinatingly contradictory.
Although Mr. Maciunas’s art work and performances have had some lasting influence — Sonic Youth performed a rendition of a piece in which a piano is destroyed — “George” leaves the impression that one enduring legacy may also be in real estate. He brought together colleagues to purchase property south of Houston Street, founding what has been reported as the first artist cooperative there. The experimental playwright Richard Foreman is blunt: “As far as I’m concerned, he created SoHo,” he says.
At two hours, the documentary is overstuffed, possibly by design. But it matches a kaleidoscopic form to a kaleidoscopic life story, honoring its subject without simplifying him.

Jeffrey Perkins' doc pays tribute to the man who invented the hard-to-define Fluxus art movement.
In a history full of -isms and manifesto-spouting collectives, few major entities in the art world are as hard to nail down as Fluxus. Was it a movement, theory or a collective whose members didn't always want to wear its name? Was it just a branding exercise? After nine years of research, Jeffrey Perkins finds that Fluxus was, above all, George Maciunas — an entrepreneurial Lithuanian emigrant who coined the name near the dawn of the '60s and spent the rest of his life decreeing what was and wasn't in Flux. Quite enjoyable even if it leaves viewers hardly feeling they understand the enigmatic man at its heart, George will play well to lovers of esoteric art and should have continuing appeal on video.
The film starts stylishly, with split screens and superimpositions evoking the anarchic, mix-and-match spirit of the art Maciunas would later promote. He was born in 1931 to a loving family, with an "unusual delicate connection" to his dance-loving mother and an early affinity for planning: He constructed double-decker houses out of snow, and was a fanatic for toy soldiers he could make do his bidding.
After his family moved to New York to escape the Russians, Maciunas studied music, architecture and design; privately, he began creating vast family-tree-like charts with which he tried to organize all of art history's many styles and impulses. He also met Anthology Film Archive founder Jonas Mekas in his early days, and the alt-film icon offers some of the doc's most revealing observations.
Perkins sees how Maciunas applied that taxonomic impulse to the unruly art world springing up around him. Yoko Ono and La Monte Young were hosting edgy concerts downtown; John Cage was freaking the music world out in classes at the New School; artist George Brecht was starting to use chance happenings and think of instructions as artworks. Working with peers in a variety of formats — from starting his own gallery to designing publications and helping produce concerts — Maciunas arrived at his notion of Fluxus as a descendant of the (still much more famous, but also confounding) European Dada movement. According to his sister, it was all a joke; but it was a joke he stuck with until he died.
Ono, one of the few of the film's many artist interviewees to have found widespread fame, recalls a general sentiment among her contemporaries: We're all independent artists, George; we don't need your label. She came around eventually, as did many others, partly because Maciunas was indefatigable. Over the years, he'd turn everything into Flux. A series of annual box sets would each contain a trove of prints, zines and weird ephemera from the artists he championed; there was a Flux Shop, Flux Chess and a Flux Hall on Canal Street; later came a walk-in Flux Labyrinth, where visitors could have full-body sensory experiences. Maciunas was unusually willing to do the grunt work of putting a complicated show together — he'd arrange for venues, do the promotion and make contact with like-minded souls around the world. He was not as good at following up, and George watches as he flees the country to evade debt collectors, installs booby traps to keep process-servers at bay and ignores pesky details like city building codes. If he'd been more paperwork-oriented, he would have made millions: With his Fluxhouses, Maciunas organized groups of artists to buy old manufacturing buildings downtown and rehab them for studios and living space. "There simply wouldn't be SoHo without George," we're told, yet he made no money in the process of creating 28 co-ops throughout the now-gold-mine neighborhood.
The doc's most personal revelations are withheld until its last half-hour, as the ailing entrepreneur moves out to the country and starts what may have been his first intimate relationship. Sickly from childhood on, he suffered immensely at the end from liver cancer and was taking morphine every day. Even so, he mounted a grand Fluxus party for his wedding, and appears to have engineered one final artwork with the idea it would be complete only after he died. Perkins ends the doc with a clip of Fluxus veteran Nam June Paik laughingly telling an interviewer that Fluxus was a name for "middle-class artists," meaning artists who weren't very famous or successful. George shows the movement's creator to be as scrappy, scroungy and happily provocative as any of the pioneers he championed.