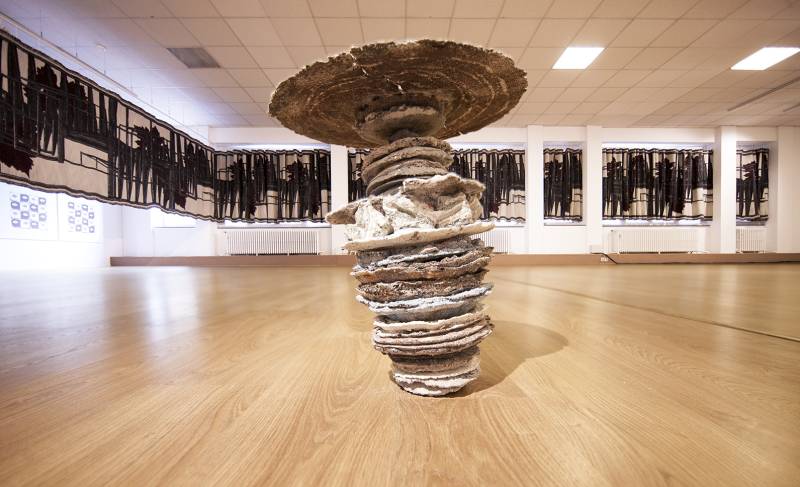 On June 1, 2017, the exhibition Cime et t + terre. Alberto Scodro & Paul De Vree will open at the Institute of Italian Culture in Brussels.

The exhibition is realized for the "a due”. Contemporary Art in Italy and Belgium, 1990-2015 show series.

Hermetic and rich of elements that energize the space around them, Alberto Scodro's polymateric installations and sculptures interpret in this exhibition the eclectic work of Paul De Vree, artist, concrete and visual poet and father of Flemish sound poetry .

Cime e Terre (Scodro, 2017), an homage to the homonymous opera by the Belgian artist in 1971, is a large tapestry produced by Bonotto Spa whose warp of wool, nylon and polyester depict an enigmatic scale and vine leaves, emblems of a time dimension close and distant, alive and lost.
Like the title of the exhibition, they also subtly alluded to the cycle of life and to its continuous dialectical movement of ascension and descent, birth and rebirth.

The exhibition also features a series of paintings (Maskers, 1972), watercolors (Oologica Belgicaa, 1945-1967), films (Essentieel, 1964, Mijn Evanaaste, 1963), and artist books representative of the many research paths De Vree devoted to the complexity of the word, through its literal, visual, sound, and performative nature.

"A due". Contemporary Art in Italy and Belgium, 1990-2015 , conceived and curated by Laura Viale and Maria Elena Minuto for the Italian Cultural Institute in Brussels, is a project born from the idea of opening a dialogue between Italian and Belgian artists.