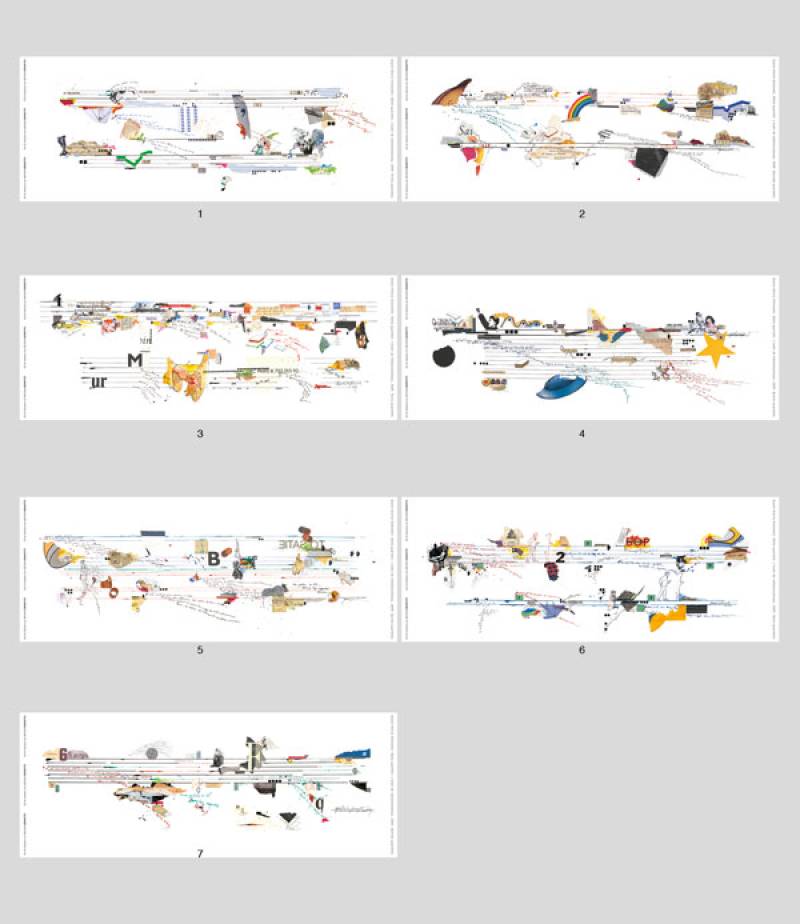 Within the project Art&Industry, the Archivio Bonotto has realized the seven quartets by Gianni Emilio Simonetti (digital printing technique on canvas, 300 x 122 cm.) exhibited during the exhibition "FluxusBox," Museo della Carale Accattino (20th February – 14th March).
The “musical graphic notation” which uses non-conventional symbols is a never resolved theme that passes through the history of avant-garde music of the twentieth century to encounter in Notations by John Cage (New York 1969) – edited by “Something Else Press” – a first fortunate critical analysis and documentary.
Why is the theme never resolved? Fundamentally because its paradigm still has to be developed, at least with regard to the indeterminacy that starting from the half of the past century involves the creative collaboration of the interpreter through a “reconstruction” of the original notation. Indeterminacies that Cage employed in his prose scores to the extreme.
In the meanwhile, however, another front has opened, that of music seen as a social event that has rightfully inserted non-conventional notation within the “visual studies.” The musical score (an image in its own right) can be conceived as a form of communication that adds ulterior knowledge to viewing.
This critical hypothesis born in 1972 with Svetlana Alpers, Ernest Gombrich’s pupil, where we here remember, The Art of Describing: Dutch Art in the Seventeenth Century, University of Chicago Press, 1983 (the Italian translation is from 1984), can be found not only in many works by Cage but also in the creative musical activities of the Fluxus movement.
These seven quartets are nothing more than an ulterior example of how, behind the music, silence is achieved by other means.
However, they are also an example of how musical notation can change its signs when encountering the patronage of an art collector and company (the Bonotto Spa in Molvena) who have realized the scores (which measures are 120 x 300 cm.) with a printing technique on fabric which could not have been achieved without an extremely advanced know-how.
These quartets were first exhibited at the museum Della Carale Accattino in Ivrea during a “Fluxus Concerto” where amongst other things the prose score by John Cage, Variation IV, 1963 was executed.


Presentation
The exhibition Perfect Irony presents works by Fluxus and Gianni-Emilio Simonetti, one of the few Italian protagonists of the movement together with Giuseppe Chiari.
The two artists realize in 1964 the exhibition Gesto e Segno at the Galleria Blu in Milan, furthermore Simonetti (together with Daniela Palazzoli and Gianni Sassi) was the promoter of Fluxus in Milan even through the centre ED.912, and the publication of the review “Bt.” The constant contact with Maciunas (one of the most politically committed of the group) has brought forth numerous organized concerts and Fluxus events in Italy.
The exhibition presents the Seven Quartets by Simonetti, large scores composed in 2009 printed on precious fabric where marks of diverse nature coexist.
From 1964 the artist, impressed by the research done by Cage, starts composing “Mutica,” seventeen scores of silent music where the visual aspect of signs and colours have a primary role.
Frequently his works are an interlacement of images and words connecting to fragments of notation.
In the works by Simonetti the constant oscillation between fragments and totality allows the encounter of two infinities: the infinitely big and the infinitely small.
Fluxus graphics are full of images, information, dramatic or visual ironic stimuli that coexist in a horror vacui uniformed only by the choice of very few colours.
The exhibition does not intend to propose a retrospective account of Fluxus, but wants to isolate certain particular aspects, such as graphics and music, which so well represent the spirit of a group always moving towards the search of perfect balance between ideological activities and irony.
The posters, belonging to the collection of Vincenzo Ferrari from Milan, have the aspect – and not casually so – of the journal, printed on both sides and rich in hardly readable information; one must see the posters “Ekstra Bladet” of 1962 or the first number of the newspaper “Fluxus cc V TRE Fluxus” of 1964.
The posters are accompanied by other graphical works like the beautiful books by Dieter Roth, ten of which form an original installation comprising of autographed instructions; the “Plan for flux toilet”, the conceptual map on the genesis of Fluxus “Fluxus (its historical…)” or the ironical “Foot in Shoe” of 1972 by Maciunas; the “Spacial Poem n. 1” by Mieko (ChieKo) Shiomi of 1966 and a multitude of Mail Art postal products.
Completing the exhibition, on the musical front we find the works, amongst others, for piano by Giuseppe Chiari, Without Title, the musical score “sparato” by Dick Higgins and 19 easy pieces by Walter Marchetti from the collection Villa Buttafava – Le Candie di Cassano Magnano (Va).
The film La voce Stratos (The voice of Stratos), under the direction of Luciano D’Onofrio and Monica Affatato describe and document the musical evolution of the artist, musician and experimenter Demetrio Stratos, from his collaboration with the Area to the study of the voice as a pure sonorous and musical instrument.
The peculiarity of his artistic stature, the extreme versatility of his vocal talents conducted him to various and diverse artistic collaborations, one even with John Cage, collocating him a bit because of history, a bit because of this honourable collaboration, into the Fluxus circle.
The event Fluxus-Box, this sort of game box full of objects and actions in various and surprising forms, is concluded by the “Fluxus Concerto”, organized and coordinated by Gianni-Emilio Simonetti, with the collaboration and coexistence of artists, musicians and performers.
There will also be the execution of the piece by Maciunas dedicated to the most famous of the inhabitants of Ivrea: In memoriam to Adriano Olivetti.