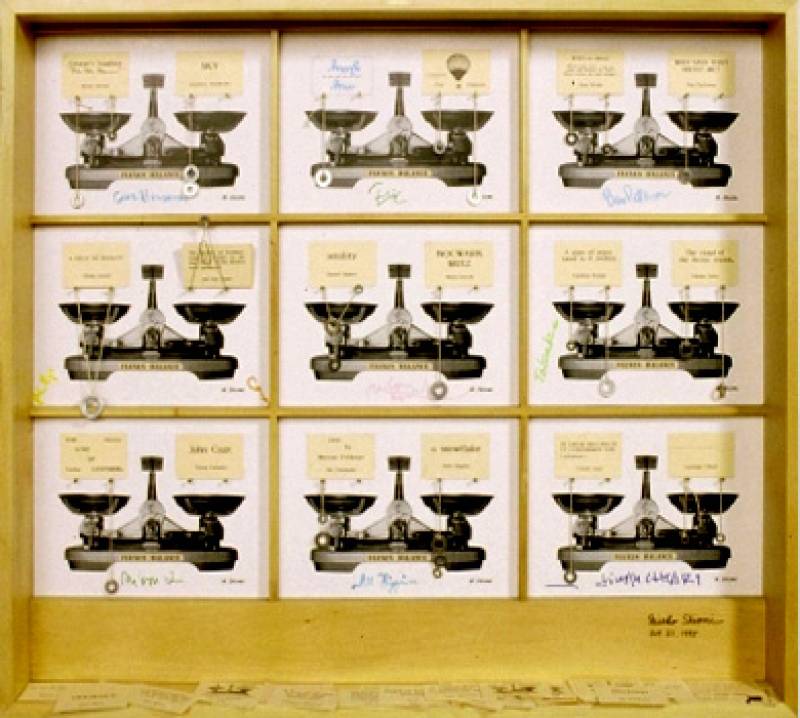 "BONOTTO AND ALL THE LIFE IN THE FLUXUS"

THE CHARACTER. For 30 years the patron filled house and neo-Dada art company that makes half a century. In Reggio Emilia, the exhibition on women in the movement of Cage and Maciunas was born of works collected by 'entrepreneur Bassano

"Everything is art" is written on the paper bag Luigi Bonotto, Bassano manufacturer of high quality fabric, sly as a hat while performing shows through the halls of Palazzo Magnani in Reggio Emilia the best of his large collection of Fluxus art, among most complete in Italy, the protagonist of the exhibition "Women in Fluxus & Other Tales Experimental. Events, scores, performances "(curated by Elena Zanichelli), together with loans Archive Equal & Unequal Rosanna Chiesso, publisher and organizer of events fluxus still in people's memories of Cavriago. Bonotto is very serious - aided by the smile of his wife Graziella - in the report, among the 250 works on display, introduced by George Maciunas of Fluxus Manifesto and the sound / write minimalist John Cage, the founding fathers of this "non-movement" neo-dada in party for his 50 years, women artists. Committed the sixties not only to break down barriers between flow of everyday life and artistic creation, as their male colleagues present here, but the protagonists "in motion" a revolution in the role and image of women in art: the group of Japanese with Yoko Ono at the top ("is a true artist" defends Bonotto from recurring rumors) and the United States. No Italian: Simone Forti, although born in Florence, was in fact active at the Judson Dance Theater in New York. In identity and intimacy from women paraded naked bodies of Carolee Schneemann and Shigeko Kubota explodes raw and "scandalous" truth female bodies and performative writing in the linguistic sense, no longer told by others, no more broken object but the subject that generates the work , autonomous in deciding what to put in evidence.

You eighties that Luigi Bonotto was left blissfully drag, but well aware, the flow of this artistic movement, filling his home in Bassano with the works of well-known artists in the world to pass on to the production processes of his company Molvena with the same "logic soft, floating, flexible" in a "slow factory" that puts creativity to the frenzy of the business: drawings, books, videos, photos, performances, records, poetic assemblages of various objects, and only in this sense , copious paperwork now on display. These works are mostly minute but special attraction, to look at but often also to touch on a do-it-yourself antidote to commodification of art: the Poems of Space glocal Mieko Shiomi, the performance of Alison Knowles, the street actions Charlotte Moorman, Kate Millet, the Skywatch ladders Yoko Ono also author of the Dream project published for the occasion, in 500 numbered copies, from Flauner & Dust (trademark of Vicenza Agency of Contemporary Art) and Archive Bonotto. There is also the straw hat of his father Giovanni, already master craftsman hatter in Marostica, which Takako Saito has transformed into a work of art ready made, playful tribute to the dna entrepreneurial family.

No painting or sculpture art but at 360 degrees, a crossroads between different languages ​​and creative forms. Fluxus-style philosophy: the newspaper is the origin of the work of art. Outside museums and salons, where art and life coincide in a revolution floating. With a good dose of irony, divergent gaze, experimentation, provocation and fun. Just click online (www.archiviobonotto.org): 10 000 objects for a total of about 400 hours of viewing. Virtual, for now, as the project architect Chipperfield of a home-museum on the banks of Bassano del Brenta is shipwrecked in silence (the institutions). Real are the works of two artists of Fluxus musical experimentation and visual, Giuseppe Chiari and Gianni Emilio Simonetti, given the exhibition "Twentieth Century Italian" which is in progress at the Civic Museum of Bassano (until January 20, with works by Balla, Boccioni, Severini, Carrà, De Pisis, Casorati, Burri, Rotella, De Chirico, Tosi, Wildt, Fontana, Ligabue, Guttuso, Morandi, Manzù, Martini, Santomaso, Schifano, Tancredi ... and many others). The exhibition at Palazzo Magnani in Reggio Emilia imvece is open until February 10.