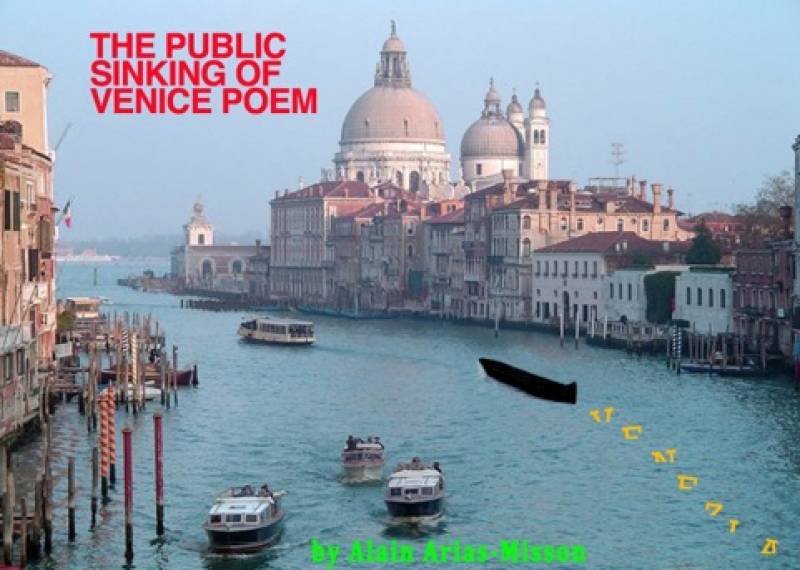 The Public Sinking of Venice Poem

As part of its program based on new strategies of experimental communication, pursuant to its main purpose of disseminating thought and work that characterize Fluxus and Experimental Poetry, Fondazione Bonotto is glad to support the new Public Poem project by Alain Arias-Misson.

Conceived of by the Belgian-American poet specifically for the city of Venice, the project arose out of sympathy with the approach applied by Okwui Enwezor to the 56th Biennale di Venezia.

The Public Sinking of Venice Poem is a provocative, surprising and ironic project. It will take place in the middle of Grand Canal; Venice and its millennial myth will be the main characters.

The Public Sinking of Venice Poem explores and develops the relationship between this city-onwater and its worldwide "brand" name: VENEZIA.
For this exceptional city, the Poet considers Water the appropriate stage for the Word to take place, much better than any other site, square, palace or museum.
In spite of many years spent in the construction of the MOSE dam, due to deep-rooted corruption, the most notorious political-environmental issue in Venice today is its slow sinking into the lagoon.
The Public Sinking of Venice Poem is intended to represent this situation through a highly graphic, moving text.

The Public Sinking of Venice Poem is the most recent Public Poem project of Arias-Misson, who invented this form of "urban poetry" in 1966. Since then, Arias-Misson has produced about one Public Poem a year all over the world: each one was originated by a written text realized in and for the city, developed in its streets and public places, outside any art context. Often self-produced, during last years the Public Poems has been sponsored by institutions as: MuhKA - Museum of Contemporary Art of Antwerp, Centre Pompidou in Paris, Kulturhaus of Berlin, Pamplona Museum, the city of Bonn, documented by the Reina Sofia Museum, etc.